Yesterday was my 40th Birthday. It is a time of reflection on what's really important in life. So I'm going to review my cars and motorcycles from the very beginning. The beginning, being when my license was issued of course.

For my 16th Birthday I inherited mom's light blue Pontiac Sunbird. Don't laugh, it had the 6 cylinder. The pizza deliver profession enabled me to spend quality time with that car. At around 17 or 18 my grandfather got in an argument with the Nissan dealer about the value of his trade, so I received a 1986 Nissan Pickup. Some stripes, Alpine, CB radio and a tonneau cover and I was off and running.
﻿
﻿

While preparing for college I became fascinated with motorcycles which scared my mother into helping me pay for a sports car. "I'll help you buy a Corvette if you'll just quit this motorcycle nonsense." I drove a few terrible 70's Corvettes and ended up being played by the local Chevy dealership. I was the proud owner of a 1986 T-Top Camaro with an anemic V6. Still it proved fast enough for me to lose my New Jersey license in short order.
I set off to college in that Camaro and took my driver test in Oklahoma immediately upon arrival. The DMV fellow threw my (revoked) New Jersey license in the trash and said "New Jersey? Git a rope." Then he handed me my Oklahoma license.
I did my time for 7 years with that Camaro, speeding here and there. I guess I saved my own life having such a slow car. But I made up for it with mullet style and glass-pack mufflers.
After spending a small fortune of my mother's money rebuilding the engine and interior of that Camaro I sold it and financed a very affordable Nissan truck again. I was now a graduate and was going to save every dime for that Cobra project I'd been daydreaming about for 7 years.
The Cobra took shape and while saving for it I spent small amounts on some motorcycles. Suzuki RM125 for some wheelie practice and a really cool Honda XR250 decommissioned from the Yakima Sheriffs patrol. You can ride on any trail when they "mistake" you for a cop.

﻿
﻿ The Cobra project was on the fast track since I worked overtime every darn day and had zero expenses initially while I lived at home. But I did pick up a small distraction after the Cobra was under way. That distraction was a 914 Porsche. It was a very fun car and I enjoyed it till the crash. I was gassing up a fuel can at the station while the Porsche rolled away. As I ran after it, it collided with a hydrant causing significant damage. The insurance company then manipulated my paranoia so that I didn't file a claim. Sold the Porsche for next to nothing and bought a Golf for transportation.


The Golf was a good deal since I bought it from an OCD Pharmacist I knew. She was crazy, but really kept her car in good condition. So now I'd joined the Shelby Club and was known for having a very cool Cobra project, but was seen more often in my shameful Golf.

﻿
﻿ I knew the Golf didn't reflect my passion but I was poor with the credit card debt as the Cobra project snowballed. I found a trashed Saleen Mustang that I thought would better reflect my passion. With my connections at Blood Enterprises I could get this thing into acceptable condition in no time.
I spent lots of money, at least in trade. Sourced parts from here and there and ended up with a relatively acceptable 1986 Saleen. Looking at old pictures, I still like the shape of them. Seats and shifter positions in these cars really needed help though. Mustangs are money pits, and too many cool things are available. All the opportunities were driving me mad.

﻿
﻿﻿ ﻿﻿ ﻿ By now the real-estate bubble was in full bore. I had sold my first home and made enough money to pay off the entire Cobra dept debt (thanks for nothing spell-checker). I did still owe my brother money associated with the car though. I paid him in the only way I knew how. I'd buy us a pair of motorcycles to settle the debt. So off to the dealership I went and borrowed more money. I arrived with a matching set of silver Suzuki SV650's. I'd read they were the best handling bikes in the world and also that the naked model felt a lot like a dirt bike, which appealed to the hooligan in both of us. Debts "settled." 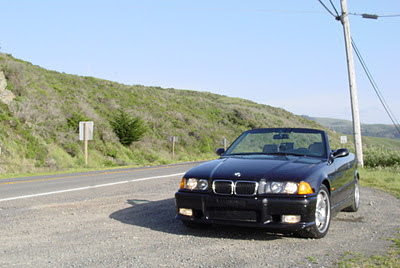 The madness over Mustang upgrades was still building. I calculated that even when I restrained myself, I was spending over $400/month on little upgrades. Also it was beginning to rust through the paint on the hood. I listed it for sale in hopes to make a down payment on a more complete, newer sports car. My target was one of the best handling cars in the world, the E36 BMW M3. I eventually took a bath on the Saleen and found my M3.
﻿
﻿
I worked 2 miles from my home, so the M3 spend a lot of time in the garage. I actually earned a little selling that car because my wife found it in California for a great deal, but that's another story.
I found the Suzuki imperfect for my new life passenger, Catherine. So I sold it and bought a Honda V-Magna. That Magna bored me almost instantly so I sold it and ended up with a Triumph Speed Triple. It was lightning fast so I sold it before killing myself and bought a basket cast Ducati Monster 900. That Ducati proved to be a money pit, but ended up a respectable machine.


Oh, did I mention the other dirt bikes? Sorry. A Husaberg 400 and a Husqvarna 650 Motard happened somewhere in there. Husaberg couldn't get tuned to my satisfaction and the Husky vibrated my ass to sleep on the street.

Somewhere around this time a 1994 Ford F150 was purchased for reasons that escape me.  Everybody's got to have an F150 at some point in his/her life.  The Ford was called Goliath by me, but after being sold for a dollar I hear that its now referred to as "Chuck the truck for a buck."


After getting rebuffed trying to test drive a Carrera at the Park Place Motors one afternoon, I bought a red 911 Carrera on Craigslist out of spite. It was a great deal on a fantastic machine I sold it a few years later after some long tiring drives where my ankle was killing me. Also our impending move to very hot Arizona was on my non-air-conditioned mind. I figured a newer 2006 BMW M3 would have the comforts I'd need for long drives in wide open Arizona. Did I mention that I hadn't found a job in Arizona yet?

Oops forgot the motorcycles again. One morning my wife woke up and said to me, "what we need is a bike with a flat seat so we can ride together more." She was lying of course, which is why I love her so much. We bought a Triumph Scrambler that morning.

Arizona never happened mostly because I had no inpatient pharmacy experience. So it was off to Port Townsend Washington, to get some. But no BMW dealers are out in the WA peninsula. What to do? I'll have to trade that M3 on an SUV, after all we'll need it for the snow and the dog. The Grand Cherokee SRT-8 has 400hp, so that's respectable right? Oh, did I mention there isn't a Jeep dealership near Port Townsend either. My bad.

Cutting expenses now, because the inpatient hostipal experience, well…. It doesn't pay shit. So I sold the Triumph motorcycle.

1 year in Port Townsend now has past and it's my 40th birthday. I've recently "stolen" an amazingly restored 1977 BMW R100S. Oh, and the dog is now afraid of the Cherokee SRT-8. We don't know why, but it might be the loud exhaust.
Happy birthday to me. 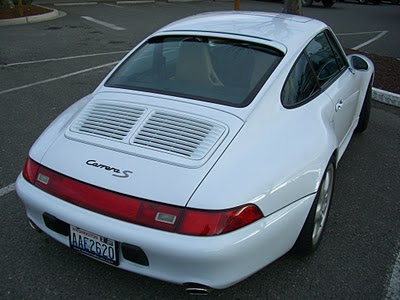