One of the most validating (and embarrasing) moments in my life was when I learned my "Cobratech" project was going to be featured in a magazine. I knew using a non-traditional power plant was risky... it cost double what using a 289 or 427 might have cost and, once complete, would be worth much less than a traditional replica.  Despite this, I thought the new SVT Mod-Motor was the future of muscle cars and insisted it was the right choice. I have no idea why I couldn't be convinced a simple 289 Cobra replica was cool enough.  In the end, I'm glad I wasn't.  I learned a lot from the project and that knowledge combined with the people I met along the way has more than made up for any value disparity.  With a magazine article as the final exclamation point, I could enjoy some recognition and fame, and after such a tremendous undertaking, that was truly priceless to me.

I located my donor-motor a couple of years before Ford introduced the crate motor program, so once underway, my project had immediate notoriety. Any time my project came up in conversation, car guys would listen. I enjoyed talking on the subject immensely. Eventually, a wrong number from an old SAAC (Shelby American Auto Club) phone listing landed me in an accidental conversation with Eric English. Eric was once the local chapter president and, as it turned out, a writer. He expressed an interest in photographing the car once it was complete with paint and interior. 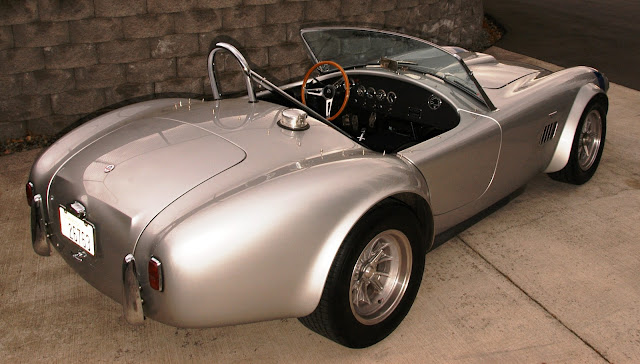 The thought of getting my car featured in a magazine certainly created some urgency. I dumped my girlfriend and bought a few cases of Boost so food breaks wouldn't slow my progress. ARE (American Racing Equipment) came to my home and quickly built custom wheels for the car.Both ACCEL and  F.A.S.T. finished the prototype fuel/spark management ECMs with a new found vigor. NW C.A.R.S put all their other painting projects on hold (if you're car enthusiast, you know that's a lie, painters don't understand the words "speed up").  Blood Enterprises stayed open later than usual and my bills got smaller (also not true).  Everybody was on board and I was very excited.

In late September of the next year, Eric and I met at a coffee shop in Magnolia where I proceeded to explode with information... how the thought of the Cobra got me through college, with little magazine pictures stuffed into the pages of my textbooks... that I bought the first wrecked Modular Mustang Cobra in the US... how the engine sat in my father's garage with 25 lbs of wire. We discussed the development of my close friendship with Craig Blood, owner of Blood Enterprises. We went over the prototype engine management software Blood & F.A.S.T.(and later ACCEL) had collaboratively developed for the car. Then there was the tale of how ERA was convinced to fit an atypical motor into their traditional replica, which was no small feat.

16" Torq-Thrust IIs with custom backspacing and prototype knock offs.  Tires are AVS Intermediate Yokahamas, w/compound appropriate for the track but wore out very quickly.  No longer sold; they were poor in rain and cold.


After I finished exploding, Eric shared with me that he was a little afraid of Cobras; all power, no traction; no safety whatsoever. I agreed and extolled the virtues of my 32 valve power plant making low rpm driving more streetable. We then went on a little drive along the waterfront, in agreement that we would take it easy since the road was cool and so were the tires. While driving cautiously and obeying all speed limits, my subconscious kept asking me, "what impression will you make driving around like THIS?" Suddenly, my excitement culminated into a burst of acceleration along a sweeping right hand curve. Did I mention it was very cold?

As the rpm's spun up, so did the car. We spun into oncoming traffic, across the street, over the curb, and up a grassy embankment. For the next 2 minutes, I tried to stop shaking while attempting to restart the car, both unsuccessfully. Upon inspection, the car hit the curb with the rear tires in a fortunate angle and no damage was found. The impact/kill switch I installed for the fuel pump was the source of the stalling. The only damage was the green grass stains on the paint (the stains in my pants were a different color).

Once composed, we both reentered the car and Eric turned to me and asked...

"So, do you want me to write about this?"

The candidates were MM&FF or Mustang and Fords magazines.  Eric chose to sell the article to Mustang and Fords, which meant no girls in bikinis would lay on the car.  A tough decision, but my grandmother though we made the right choice.