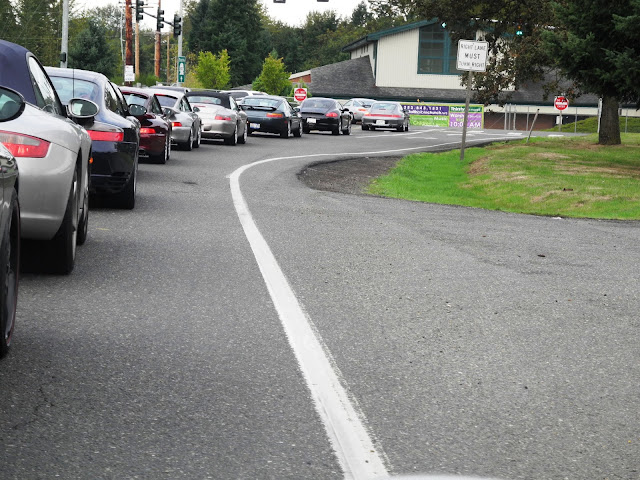 That's not Bellevue WA traffic.  Its a PNWR PCA tour. A feisty one. 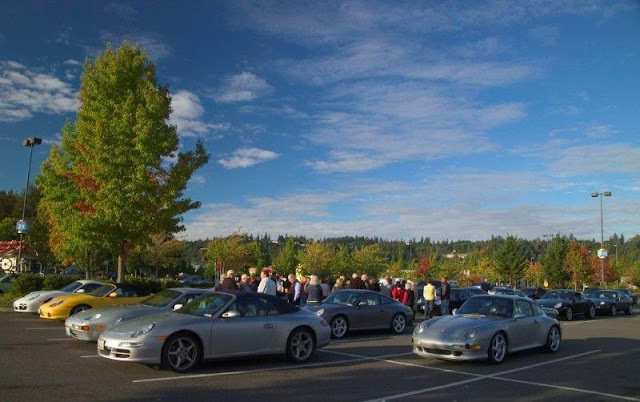 On an organized tour this weekend  I found satisfaction.  It was organized by someone else, so no work for me, I just showed up and had fun.  Not the kind of fun you have running to the Home Depot in your Carrera, but the real kind.  Just a spirited trip down to Oregon and back.  I gotta tell you, you just can't beat looking in front of you and seeing an awesome car, then looking behind you and seeing another awesome car.  Multiply that by say 7, as in 7 Porsches in front and behind.  Then you really get some satisfaction.  Now take those 15 cars and inject just a little testosterone.  That was my weekend.

Being out-matched buy other cars was really wasn't that demoralizing.   There is always someone faster than you and your car.  I just accepted it and then it actually made it even better. You watch the faster cars disappear, then you try to catch them. Meanwhile the cars behind you keep you focused.  You never need to program your GPS or read any street signs, just watch the car ahead of you and stay on the gas.  Everyone was old enough to contain themselves so we stayed out of prison, but nobody was so mature that we won any merit badges either.


Group rides vs track days.  Well, if you're a hard core speed junkie you're not going to find a substitute with a group ride.  But if you appreciate not burning through a set of tires or a set of brake pads a spirited group ride might be for you.  Also, you're allowed to roll  up your windows up when it rains, which is a plus. 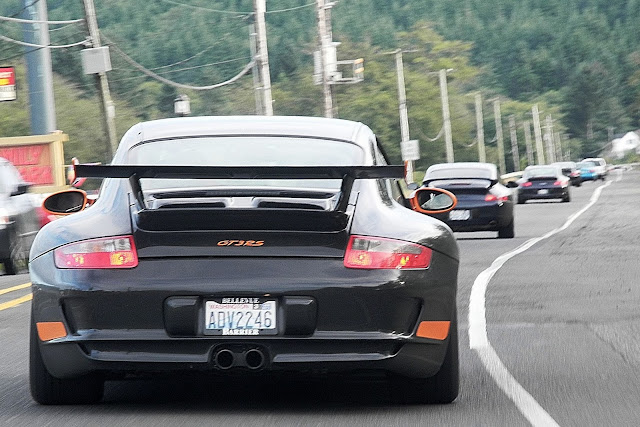 I'm writing a short article for the club's periodical about my experience, it seems they ask first timers to do that.  That suited me just fine, I felt like less of a tourist photographing every single car with that excuse.   Writing about it was easy.  Hell, that's all I've been thinking about anyway.  I can't go into details about the event too much or I'll end up plagiarizing myself.   Also, I'm only including the pictures I don't want to be considered for the article.   But what did you expect from a crappy blog with no advertising?.

I'm looking forward to going again next year. That gives me 12 months to find
a carbon shift knob and wait for my picture to come down at the post office. 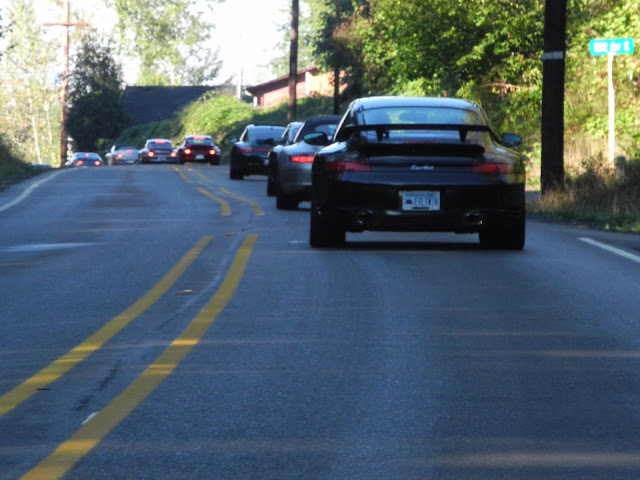 I'm using more restraint writing this than I did on the drive.
That's all I'm saying.
The end.
P.S.
Now that I said I'm not saying any more, let me just say something else.  Our Porsche group which was group 2 and well behaved, might have had a unofficial "splinter group."  This group might have self proclaimed themselves "Group B."  This group might not want to call any more attention to themselves than necessary, but they are out there, probably. This group might have driven with excessive spirit at times.  But maybe not, I really can't recall.
Posted by Adam at Monday, October 10, 2011