Its hard to criticize the competition when they are all the same model, but not impossible. 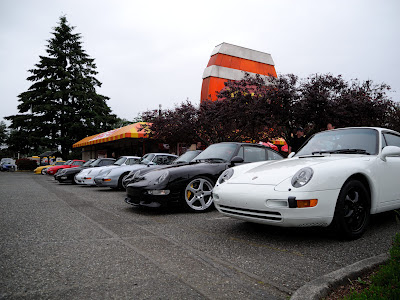 I'm so excited after returning from this event I can barely get the words onto this blog.  Basically, the event is self-explanatory.  Many of the 993 centric Porsche enthusiasts wanted their own special event.  So Nathan (more about him later) put on an event for us.  Word spread through the usual venues like Rennlist, Yahoo group, and Facebook.  The date was Father's Day weekend, not chosen to exclude fathers, but rather because it was soon and didn't conflict with any track events.   The first 993FEST was born.

While the route is not a secret, I won't be sharing it.  It was relatively secluded, if the roads were inundated with punks like your, then we'd have problems with the man.   In true Seattle fashion it began with rain.  It didn't rain for long, nor did we drive on major highways for long either.

Our group consisted of pretty experienced drivers.  Track time beyond simple drivers education was apparent in our group.  I didn't interview everyone, but it was apparent by everyone's driving style.  I tried to keep the track veterans in front of me, so they couldn't learn any of my secret driving techniques and steal them.

These photos of the cars close together are all taken either parking or stopping for the group to reassemble.   The driver skill/comfort level hierarchy was setup from front to back so the group spread  easily when underway.  In other words, with minimal passing and everybody had enough room to be comfortable once we reached warp speed.   Although I've not spent a ton of track time in my Carrera, I basically lived at Pacific Raceway from 1999-2001 so I was plenty fast.  I  still drove near the back of the lineup, but that's just because the sun was in my eyes :)

Once we arrived at our first rest stop, a Starbucks, we'd been driving about 2 hours.  I had to stifle the urge to run up and hug Nathan.  I'd been on tours that were fun, I'd been on tours with crazy morons too.  This was a perfect run for a group of folks all with like mindedness and the same car model designation in common.  The 993

When the area's were particularly stimulating a brave, fearless man proceded ahead to blaze a trail.  A hero proceded ahead into danger to clear a path for his 993 Festers.  Meanwhile everyone else prepared emotionally for the epic portion of the jaunt in quiet meditation.  What was that brave soul's name and how can they ever repay him?

The rendezvous point for the groups to converge was at Snipes Brewing.  And no, we didn't drink beer. We take our driving way too seriously for that.   www.snipesmountain.com

By this point now the group had grown to about 16 cars, somebody correct me if I'm wrong because I never counted.   Another hour was spent on the road before Richland for a bit more twisties.  Some sections were pretty open, and  as speed climbed many people later commented that handling was degrading in their cars.  Heat was the problem, shocks and tires had been in the heat for over 4 hours by now.  Perhaps getting a good workout from the secondary roads and sunshine.  I estimate my tire pressure was likely over 47psi in front and over 52psi in the rear.  Clearly in hindsight I/we should have checked our tire pressures before departing Snipes brewery.  But we were just too drunk I guess (it's a joke, dumbass).  If you are treating the road like you're at a track day then you should treat your car like its at a track day too.  Check that tire pressure! 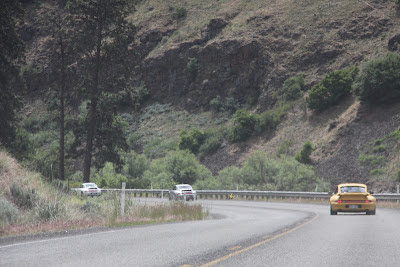 Once arriving at our destination, some of us went to our hotel to clean up.  Others cleaned up their cars instead.  I may have looked like crap, but damn my Carrera was clean.  Happily many others shared my philosophy. While waiting our turn at the pressure washer we enjoyed the inventory at Nathan's establishment. www.cvluxurycars.com 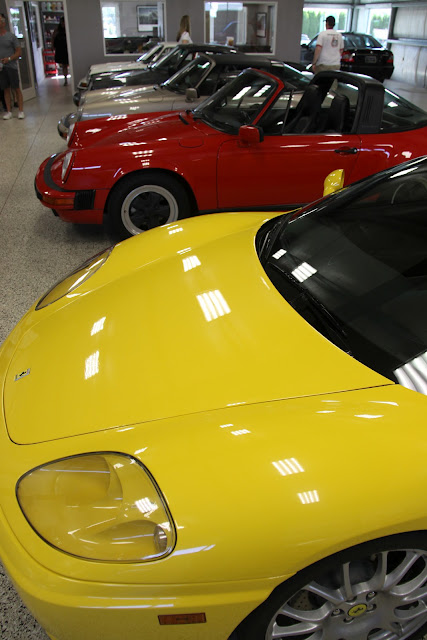 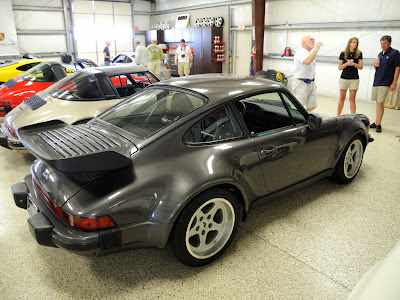 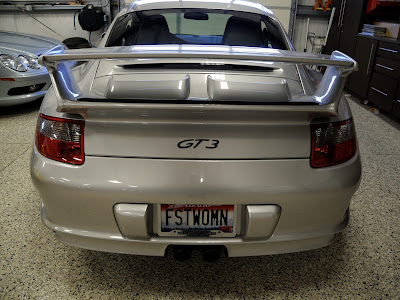 Another high point of the event was the spread Nathan had arranged for us.  I neglected to get photos, but the food was great, and much appreciated.  Bottled water and even a beer was served and consumed with gratitude.   Later I saw ice cream too. 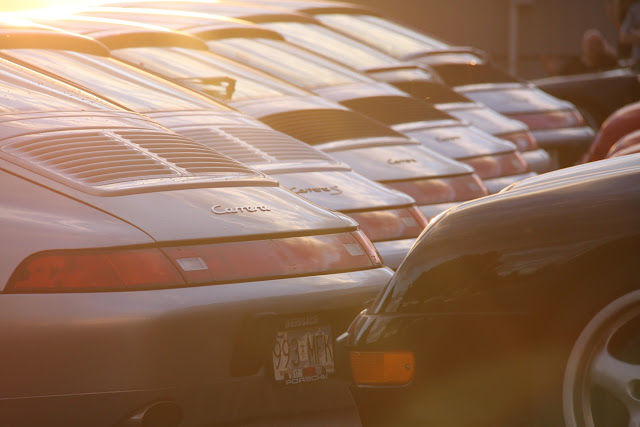 Contrary to popular belief we Porsche drivers can't park for shit.  I think its because we spend all that time parking diagonally in far corners of parking lots.   But again, a hero emerged who with the help of some smart asses got these cars parked in fairly good, C+ quality, arrangement. Just like my college GPA.   Hey, didn't you ever hear the term "perfect is the enemy of good"?

No amount of pictures can possibly capture the fun.  Frankly it's futile to try, you just have to go on one of these events to really enjoy it.   Our group wasn't for the faint of heart, but rarely did anyone do anything that made me ashamed to be a part of it either.  Events this cool don't happen without somebody making the effort and taking initiative.  Thanks again Nathan.

There are faster cars.  Hell there are cars that handle better too, and they can be had for less money too.    I'm sure glad I found mine.  But the relationship all of us have with our 993 Carreras is more complex than that.  It's special.

Arrangements were made for most of us to share the same motel, although I got up early I heard talk of a breakfast get together.  Perhaps groups road home the long way too.   I typed this blog all night to the musical sounds of the Le Mans 24-hour race, which opened the door for my next blog subject maybe, hybrids?    A perfect day, and a perfect beginning of a new annual tradition I suspect.

So many good pics,  more below.

Our leader Nathan, took the initiative and made this more than an idea.  He made it happen.  Often you go to a cool dealership hoping a car guy will be running it and you are disappointed.  I personally get sick to my stomach going into dealerships.  But the alternative of buying a hard to find car on the web isn't much better. It's not that you can't ge lucky, but you've got to be patient and tolerate some odd behavior an paranoia.  Those sellers can be downright weird (see buying online blog, its funny if I do say so myself).   Nathan is a car guy to the bone, he's clearly in it because the CARS are his passion.  My kind of guy. 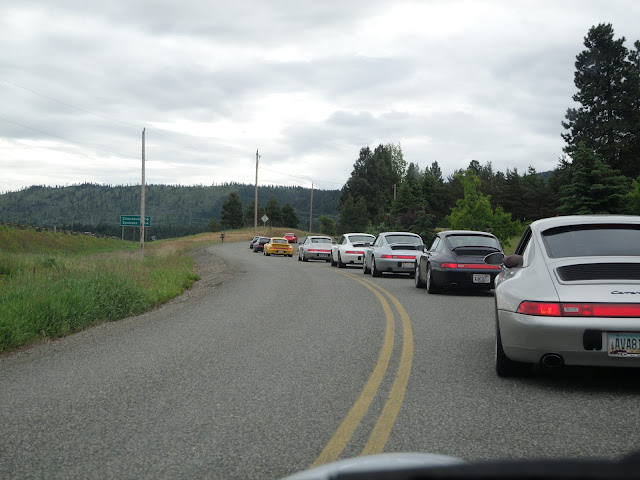 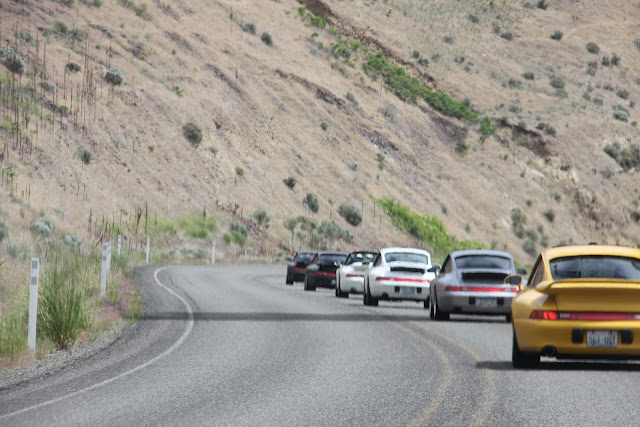 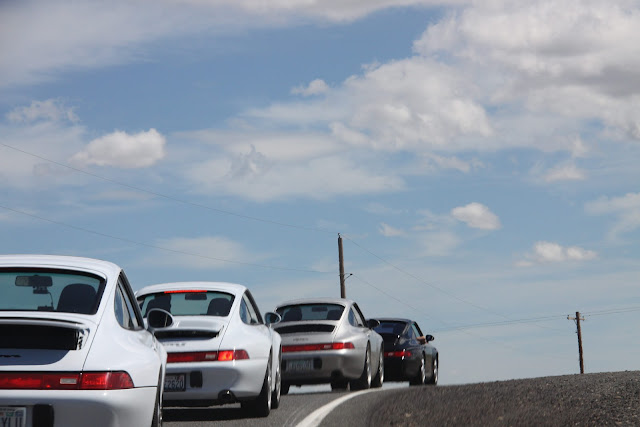 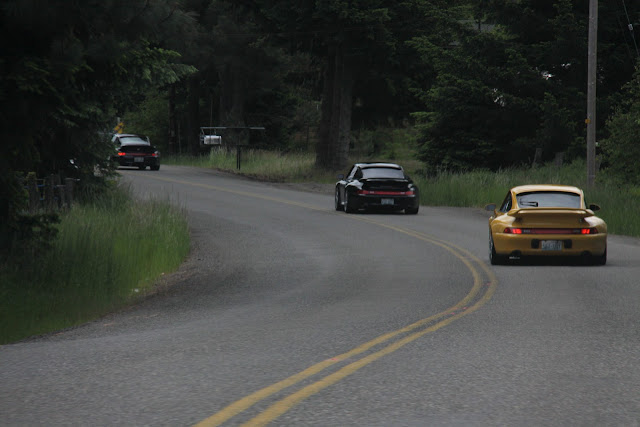 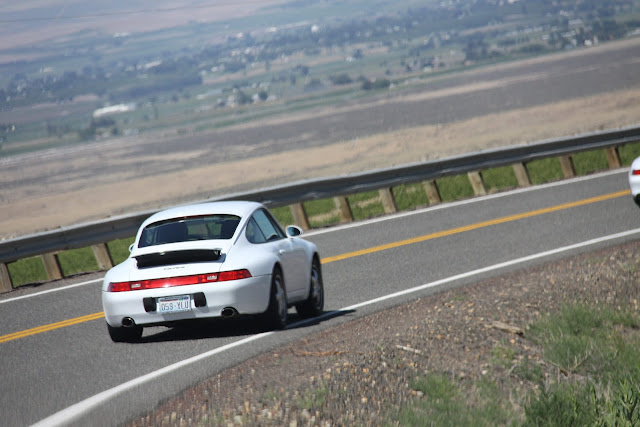 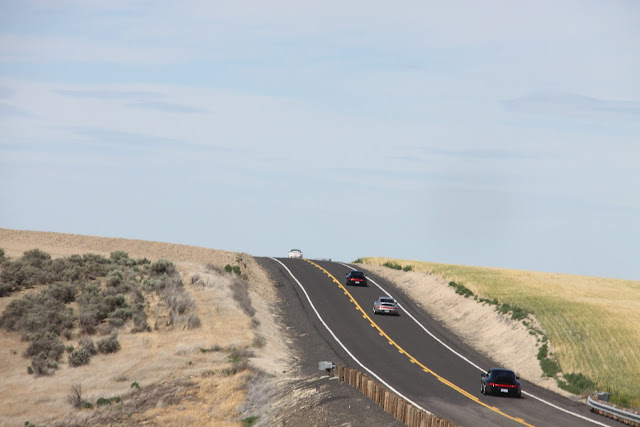 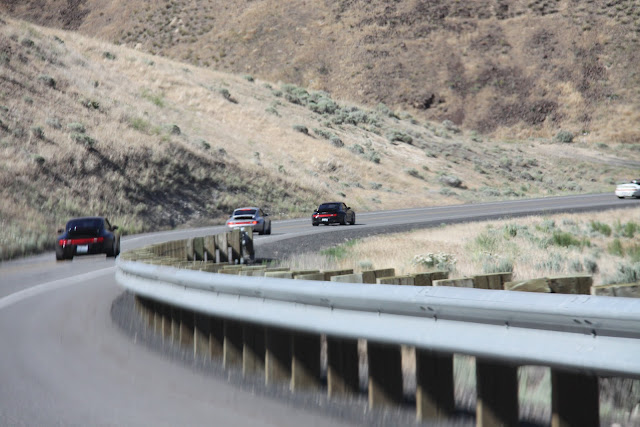 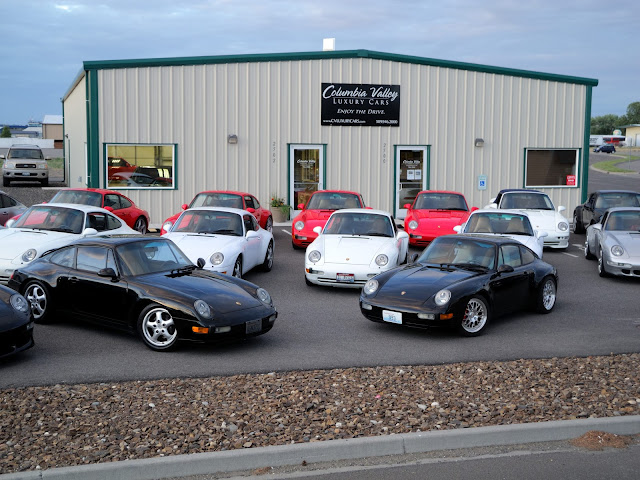 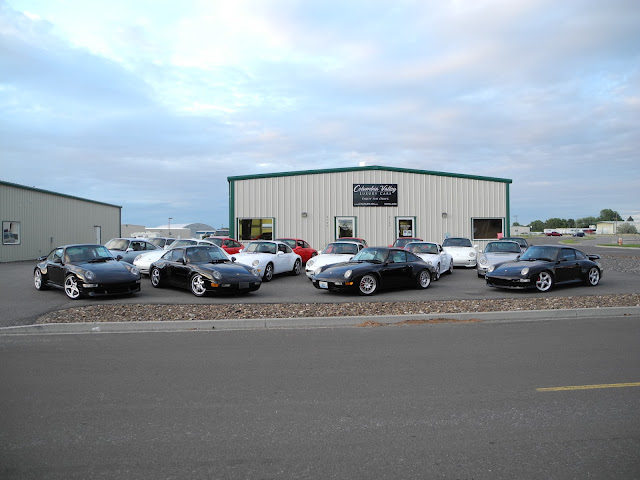 Today we celebrate my first sighting of an Alfa Romeo 8C Competizione in its natural habitat, the road. Spotting significant cars at the track or at a show is boring in comparison to using your natural car guy radar in your day to day life. Of course I must confess, this one just pulled up next to me in the SRT8 while gassing up, something I seem to do pretty frequently.


While this is not a car I'm recommending, we only endorse supercars that are super-cheap at www.sportscarguyspeaks.com. It is very special and damnit, inspiring. It fills me with hope that other Alfas might pop up around here in the future.


Bob is the new owner of an Italian Supercar he picked up just yesterday. He and Lisa are enthusiastic about this new ride and are completely devoide of some of the indifferent snobbery that can accompany such cars. Unfortunately not every Supercar owner is a car guy. Being gracious toward admirers is your sacred duty. Although we spoke only for a minute, Bob is definitely one of us. Cheers Bob, and congratulations. 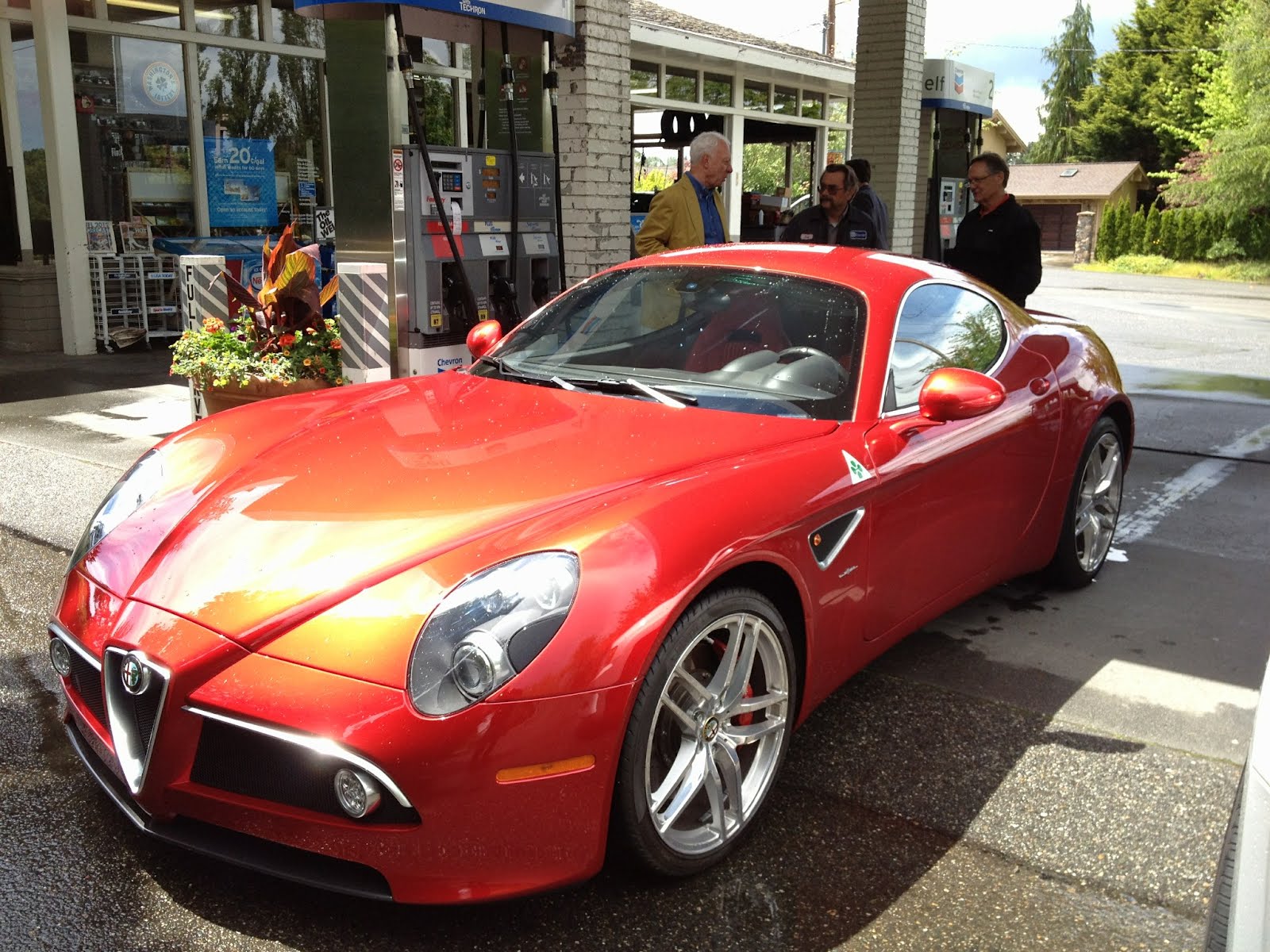 Oh, and also kudos to them for not having a panic attack over the sudden rain that hit during their drive today too.  If you can't afford a little rain on your car, you can’t afford the car.  Contrary to popular belief, even italian cars are water proof. 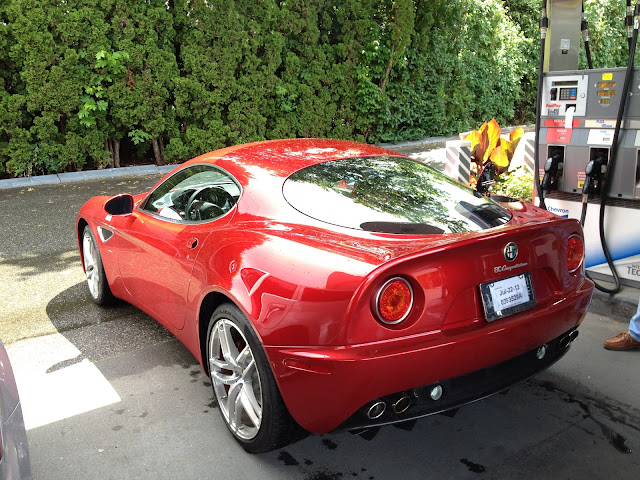 The newish Alfa 8C is a great way to penetrate the US market, I hope. Since these hit the road in 2008, I would have expected something to follow by now.  I sure hope we’ll see sedans again.   There is a certain understated magnificence to this little Alfa.   It’s dramatic, but not as loudly dramatic as a Ferrari or Lamborghini.  Designed a bit more purposeful than Maseratis current offerings,  not that Maseratis don’t have a place in my imaginary garage.   They got this car just right from an aesthetic perspective for sure.  I’ll leave the driving reports to the magazines. 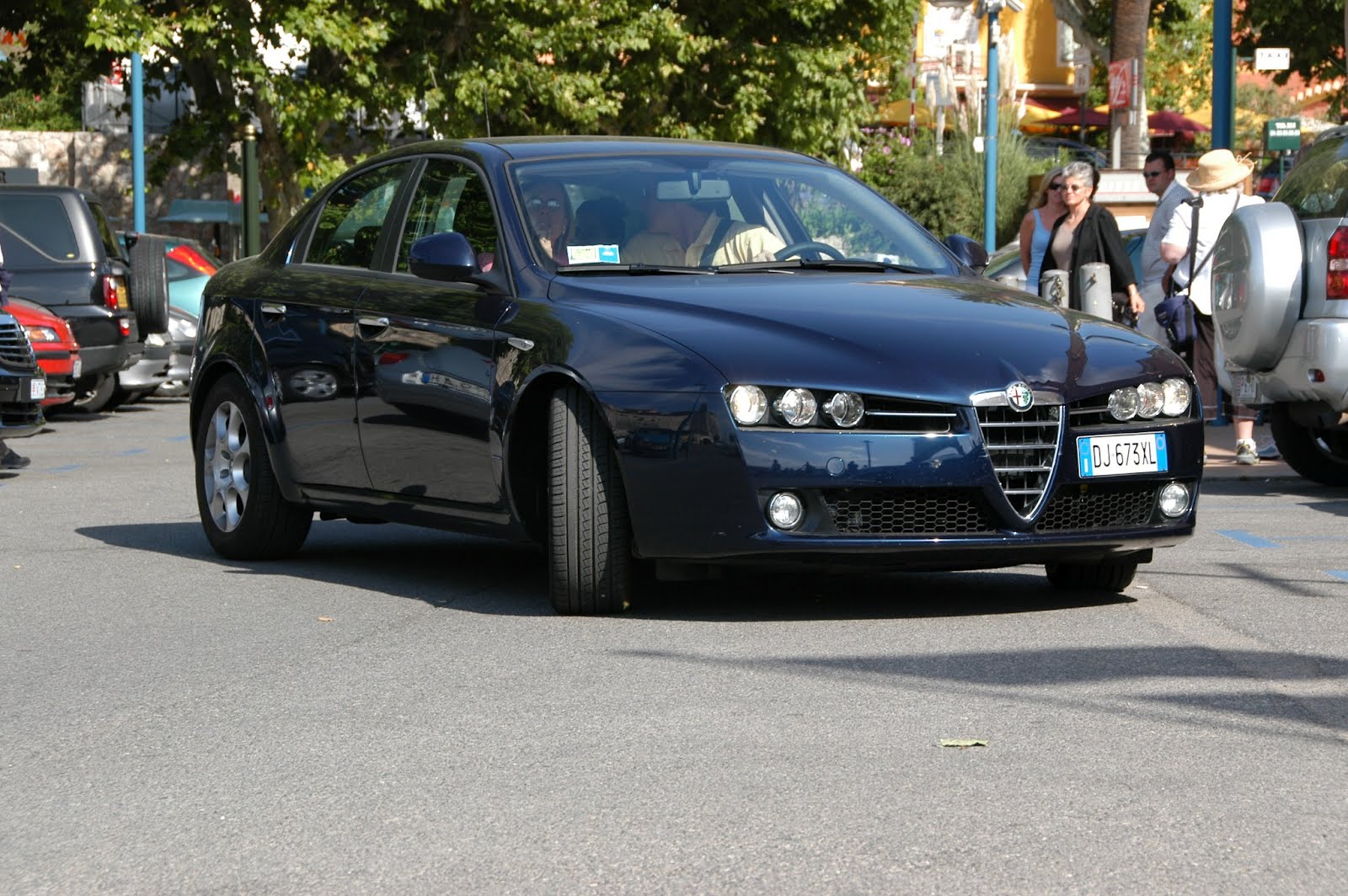 I’d swap an BMW M3 or an Audi S4 for something like this one my wife admired in Europe a few years back.


Lastly, Bob is celebrating his wife Lisa's birthday with a ride out in the car. That's how I like to celebrate my wife's birthday too. In a ride in your Alfa Bob.

Nothing to say here I know, you've told yourself and your significant other that you don't want one.  But you do don't you?  So don't be rude, drink your coffee, enjoy the photo and that's all your gonna do.

Lamborghini Countach
Posted by Adam at Friday, June 01, 2012 No comments: