You remember that old Porsche 993 Twin Turbo add right?  Well, its true, you can!  And we did.

This was only the second annual 993FEST, but we definitely had a good number of 993's show up.  I didn't count cars, take notes, nor did I take any photos this year.  Once the beer started flowing at our destination it got hard to rally everyone for a group car-photo too.  No problem, group photos are a pain in the ass anyway.   I concentrated on having a good time, and left the photos to others.  I'd then steal them for this blog later.  hehe

Now it's true a few folks could not make it for various  reasons:

"Autocross scheduling conflicts"  Okay, but you better win.
Too far to drive from Florida. Lame, take a Ritalin put on a diaper and get in your car.
"I'm very sick"  Oh, please, two other guys were cured at last year's 993FEST
"My car's broken."  I know 2 or 3 replacement 993's currently for sale, don't you have credit?.
"It's the big piano recital for my daughter."  ever heard of Facetime?
"It's my wife's birthday"  what better gift?


Luckily those lame excuses excluded, every damn 993 in the USA was there I figure.  Yep, I'm pretty sure that's accurate.  If you didn't come and do actually own a 993, my apologies, I simply forgot your car existed.  Send me an email and I'll add your excuse to the list above.  (that's  joke, don't email me,  I'm well aware there were about 10 or 11 other 993's in the USA that didn't make it)

Seriously folks, it is a shame we are so far to the west that you couldn't get here, but perhaps next year it will be even bigger and better and we'll see you then.

Although several groups departed from several locations, I departed from the famous (and last standing) XXX Rootbeer Stand in Issaquah WA just outside of Seattle.  As Nathan our host and leader began to speak I felt the "red mist" come over me.  It took all my strength not to scream some profane salute to the fun that awaited.   Very few people voted to run in the "fast" group so we all went in the sub 200mph group instead.  Although we pride ourselves for not bringing our wiener dogs along as passengers, we did drive with some restraint.  After all, it's a event on public roads, and driving over 200mph is just rude to the locals anyhow.


We skipped the hard core malevolence and left that to the Subarus and Honda clubs, thank you.   It was spirited, but mature.  To clarify, most everyone had track education and employed some of it. If you want details look elsewhere,I write for wise cracks and inaccuracy only.  But lets just say, please don't call 911 when you see us.  We are good people, and they'll never get here in time anyway.

There is a certain neurotoxicity that affects me while on such drives.  I basically obsess over upgrades during every minute I'm on the straights, lunch, or restroom.  Damn, budget issues are why I stopped going to the track!  I'd blow a $1000 on goodies and maintenance every track day.  I was hoping these group rides would be a cheaper venue.   But now my mind starts to wander.   "how much did those hard back seats cost ?"  $7000?   Oh shit.


Don't ask me what mountain that is.  What do I look like, a geographer?  They are just inserted randomly by god throughout the Pacific Northwest to make my car driving more interesting.  If you enjoy them too, you owe me a quarter.


What I like most about organized ride is that somebody else figures it all out.  Then I can relive it via my GPS if I'd like to do it again.  Perhaps in my Ford Explorer.


No ride would be complete without a significant dose of car envy.  I found myself admiring that GT2 replica, but the turbo cars have been whispering to me more and more.  Perhaps if I keep driving my '98 Explorer for another year and resist buying a cool daily driver, I can save up to trade up.

3 custom interpretations.  Not everyone is so timid they can't build his car to suit himself.  I use originality only as an excuse to keep myself within budget.  Hell, I'm even known to drink Starbuck Breakfast blend in the afternoon.

If funds allowed, I'd build all three of these babies. One's a color-change wrap (Riviera Blue), one's a custom (they didn't produce a 993 Speedster) and the last is a replica/tribute of the GT2. I'll take a Riviera Blue 993 Speedster with the GT2 Motor please. 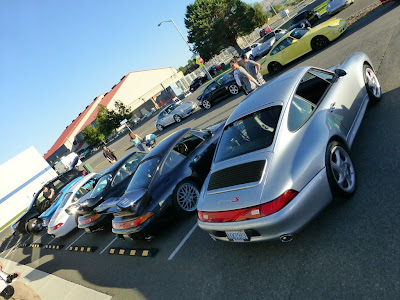 Home sweet home at our destination  Columbia Valley Luxury Cars.
Nathan had BBQ waiting for us,  local micro brewed beer and a band.

Every photo here was courtesy of the attendees, harvested (with permission from the posters, or I warned them at least) from the Rennlist forum.   Credit errors are happily corrected just post a comment to me .  If you aren't on Rennlist, then you probably drive a Camry.

Thanks again to Nathan and Columbia Valley Luxury Cars.