I don't need a new M2 or an Alfa Guila Quadrifoglio, right?.   I mean who needs those pieces of crap? Screw those cars.

After all the M3/4/5 is a more real car.
1. it has real rack and pinion, not electronic steering trying to feel real.
2. it has one handling mode only and no switch.  It on all the damn time so if your Starbucks sloshes around, get a towel.
3. it has no power memory seats.  It doesn't remember my seat position because I don't let the wife drive the damn thing.  I leave the toilet seat up intentionally sometimes too.
4. it has a real manual transmission, but more importantly...  You can place paddle shifters anywhere you like, but they won't help your testicles grow back.
5. it has no infotainment.  It's my right as an american to be offended by much less.  So yep, I'm offended by infotainment.

My mission is the make my $10,000 BMW E36 M3 believably cool even by today's standards.  Call it self actualization, call it conceit.  Shit, call it retail therapy; I don't car.  (Care intentionally misspelled to be cute)

Seems starting with the "Best handling car at any price" by Car and Driver, is a good start. Nevertheless,  the E36 is certainly at the bottom of its market, which is good for me because I too am at the bottom of my market.

It's not hard to say a car handles good when they are small and tight like this one.  I can't make it smaller, but I can make it tighter.  Everyone likes tighter.

The current rage about the recent BMW M1 and M2 has a lot to do with its size.  Handling dynamics are inextricably tied to size and weight.  Look at the cars we all love.  Lotus Elise,  Mazda MX5,  Mini-Coopers, and even Shelby Cobras were tiny little cars.  So we are back to small because it's nothing new, it was cool now because it was cool then.


I'm not running a physics class here's the bottom line on "tightness":  stiff chassis = great handling.  Sedans are more rigid than coupes, just look around at the track and you'll figure it out.   Furthermore, my example is a sedan without the popular folding rear seats, hence the most rigid M3 you'll ever find.  I rule!

That said to get a 20yr old car up to snuff I think a few little things are still in order.  So a quick romp through Craigslist and eBay and I've scrounged the following

You can't make this sucker new, but you can make it shiny.

Appearance of a new car, and  feel of a new car is hard to beat. Starting with a super detailed cleaning, you'll identify many depressing items on any used car.  These broken bits and pieces are a big part of  that makes old cars old.   While the M3 5-speed sedan isn't  terribly common,  each individual part is very common.  So in this world of free information its really easy to source these things once identified, even if  stupid.  Log into Facebook and ask the people with nothing better to do to help you.

Other items clearly not worth a screen shot include BMW badges, various small screw covers, trim pieces,  clunky switches etc etc.  Tracking them all down w/out paying retail takes a bit of time, but that's how you make an old car young again.  If you want to look like The Rock, you gotta get up  at 4am each day, same with car restoration.

Squeak patrol:  I don't tolerate that shit.   I find and destroy them, and luckly the M3 is well made, so they are few and easily rectified when identified.   Sunroof is boring and not pictured here, but I rebuild some of it and quieted that crap down.  Some pastic bits here and there benefited from Dynamat (it only takes a piece about the size of a quarter to make a huge improvement).  Heater fan is showing signs of imminent failure, it will wait till I pull the dash over winter.

Items on hold till winter
1. On board computer's clock has gone dark.  I need a new one but refuse to pay for a stupid clock.
2. Heater core (this is cheap but a 10 hour job, so is waiting till winter.
3. Heater fan  makes faint noises, will fail in a year or two.  (address with item 2 above)
4. Keyless entry,  this is an opportunity when car is apart for heater core.

I need this M3 to be more sporty than it was and accept its limitations too. While performance is important, it is also a moving target you'll never hit.  A 1988 Porsche 911 frankly cannot compete with a new Accord with V-Tech, but no on argues the Porsche is more sporty.  My goal is not to turn this into something it is not, but rather communicate more with the driver by feel, sound and modest performance changes.  It's not how fast your car is, its how fast it feels. There will always be a minivan  that's faster than your M3, but it won't feel fast because of the Paw Patrol video playing in back.

It's safe to say Dinan upgrades are modest , reliable and over priced.  In the 90's Dinan figured all this out, so I will simply buy every damn thing they ever made for this sucker.  I'm shallow, and you know you are too.


People complain about the value of Dinan shit.  If they can charge more, good for them.  They have built a brand and should benefit from it.   That said, If I can find that same stuff used, good for me.  I have a budget to keep and a Craigslist/eBay strategy to my upgrades. My gut says I've spent about $1250 on $4000 worth of goodies. Spreadsheets and shopping lists bore me and take away space that could be used for sarcasm.


Forced induction strikes fear in the hearts of the uninitiated. If properly intercooled and modest in output, a supercharger is quite an easy, reliable improvement w/out much of a down side.  Dinan actually offered supercharging in 1997 and even backed it with a warranty rivaling the BMW warranty to appease the paranoid. But other companies offer more modern approaches. Once you've been blown, you'll understand.

For now supercharging is on hold till I read and comprehend the 35 pages of 350 installation steps.  All with not a single photo.   I'm a car guy to the bone, but this is a lot to digest late at night when drunk.  After all that's when I do all my car shit.

You cannot deviate too far from a car's original design, or old people will crack jokes about you at cars and coffee.  I will attempt to appear like the coolest stock M3 one could buy back in 1997, and nothing more.

* A factory style spoiler is in the works but cannot yet be pictured.


Posted by Adam at Wednesday, December 13, 2017 No comments: Links to this post 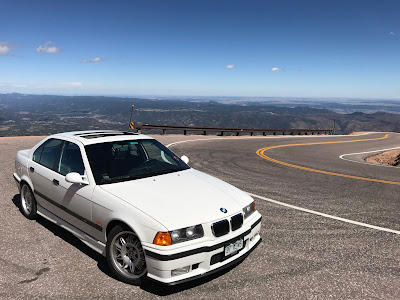 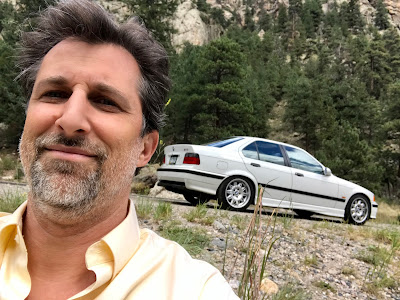 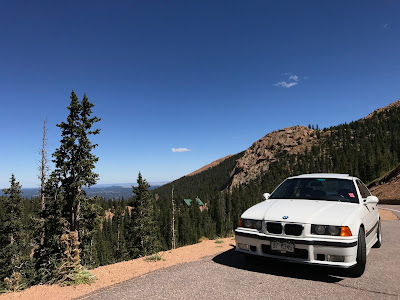