and so it begins. 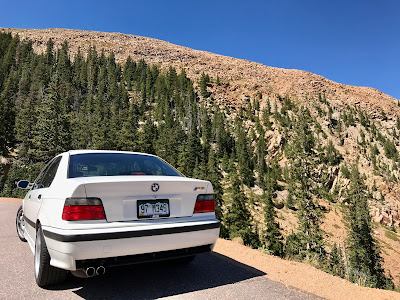 I have  an  obsession with the original Dinan Supercharger. With all it's shortcomings, I "need" it because it was the ultimate factory option in the 90's.  Authorized dealers would install these, then Dinan insured them to maintain the factory warranty.

Below explains where I 'm headed with my M3,  but with less carbon fiber.


Okay,  almost a factory option;  you're going to find that many of the truths we cling to depend greatly on our own point of view.

Dinan offered quite a nice package, who could resist?
Why the hell would I want this shit?  I'm still asking myself this question.   Probably for the same reason people like the Maserati Biturbo, the Taurus SHO or any 80's Jaguar. Because it's cool, cool always trumps smart or prudent.

So like a bad relationship, I'm hooked on this old Dinan shit. What to do?
I'll tell you what I'll do: find it, Paint it, get cooler clamps and hoses, then address the big issue....
cool down the damn intake charge that's what! 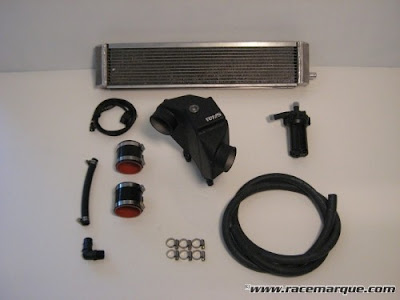 That cooling issue is now a 20 year old problem, so it's not a problem.  Enter the RMS cooler, ideal for Dinan's setup.   An after-cooler system,  it's a heat exchanger using a water pump between two radiators.   This "after-cooling" is easier to plumb because of the smaller hoses carrying water instead of air.  Thereby fixing the inherent problem with Dinan's  setup and less hideous than a air "intercooler" that is more common.

Why cool down the intake charge?  I'll explain here.

Actually no I won't explain, I'm not your high school physics teacher,  so go look up a YouTube video on why compressed air is hot.  Then watch another video on what detonation and heat soak are.  They are the work of the Dark Side,  of that I am sure.
In the true spirit of my lazy-ass I have crowd sourced my plan and entirely.  I relied on all this information from Facebook forum I founded,  M3/4/5 Group   Yes, I could have found answers and products on any existing forums, but that is too hard.  I simply waited for my team of twenty  legion* of unwitting minions to offer me a solution.   I am an evil genius, I know.

It wasn't long before the exact Frankenstein setup I "need" was located just a hour away. Clearly parts availability is one major upside of the E36.  Originally a Dinan setup, then later enhanced with the RMS after-cooler mentioned above, this was perfect.  I was able to swap, negotiate and then sell some plasma to work out a deal.  It's possible I killed a man too, but It's all quite foggy now.

Now if you think the next step is installation, you are as stupid as I was 48 hrs ago.  Every single part should be assessed and refurbished if you are as uptight as I am.    I'll give you a hint........

Addendum:  Apparently Dinan actually offered such a setup as the one above (10psi, w/RMS cooling) as an unadvertised option.  I cannot say this is one of those setups or simply an attempt to copy it.   Either way I'm quite happy.