So in theory, selling the M3 was a good idea. but I lost a valuable pastime.  Tinkering in the garage was quite therapeutic and tinkering with the Porsche gets me broke pretty quickly.   Frankly if I could turn back time I'd get the M3 back and discard the Porsche.   But that's not news, I've regretted buying AND selling every damn car I've ever owned.   Why would the M3 be any different?  Oh, and did I mention the Raptor I bought?   Never blogged about that minor diversion.

So I needed a project that was primarily elbow grease and minimal outlay of the Benjamins (that's hipster talk for money).   So I pulled the trigger on this 22K mile goldwing.  Since its an unexciting Japanese motorcycle, it should be mechanically sound albeit aesthetically unpleasing.


I grabbed some cash and took an Uber to Denver after confirming the bike was capable of driving home in its current state.    Once home, I found it did indeed run quite well, but the electrical as well as countless little things needed addressing.  Like any 40+ yr old person it has seen better days but can still satisfy you if you are drunk or squint when looking at her.

This was just the mental health distraction I needed.  Why pay a therapist $150/hr when you can just tinker on a motorcycle every evening for free.   Well, "free"  might be a tad inaccurate if you check my eBay and Amazon.com history.  But hey,  I've been through a lot this past year and need this distraction.  I wonder if I get a doctor's prescription, will my insurance pay for these parts?

1. Rectify improper wiring to starter, headlights and turn signals.
2. Buy turn signals and tail lights.
Yes indeed, 40+ years did take a small toll on dear old Jenny.   The cables needed attention, tires were old, and forks were weeping slightly.  Lights were all gone, or broken, exhaust leaking, cellulite (just checking to see if you are reading).   Overall through, I wouldn't kick Jenny out of bed if I woke to finder her there.   She's not too shabby for her age.    Jenny's got character and she needs me to save here just like she is saving me.   Too sappy?  I'll tone it down.

Sometimes looking good comes with a cost.  Once completed I have found that this tiny saddle could easily lead to a broken tooth or spinal damage.  The shocks look sweet, but don't work much like shocks.   I'm thinking perhaps a mouthguard would be a wise investment,  I've also ordered seat springs that are coming soon.
11. buy throttle cable
12. buy digital flasher relay
13. buy speedometer cable
14. buy tachometer cable

I was disappointed no vintage looking tires were readily available.  Frankly nothing was available except expensive Pirelli Knight Dragons.  I couldn't confirm existing tire age,  they had no miles on them, but were probably 20 yrs old.   Unsafe.   Luckily these are now radials  for it now, which my chiropractor appreciates.

You think you want a classic till you realize it adds 4 minutes to your drive to Starbucks to warm up every morning.  So how's it ride?   Well it's got long legs, meaning it likes to cruise at higher speeds, typical of a Goldwing.
How did anyone get anywhere in these old bikes?  The think gets about 9 miles per gallon, so the range is quite short given the tank is small and hidden under the seat.  I've run out of gas twice already due to stupidity and my inability to read a gas gauge or use the reservoir properly.
Left over paint,  now that's thrifty isn't it?   I'd originally planned to prime the panels and pay a painter to spray the bike whatever color was readily available during a car respray.  But the primer I used on my BMW R100RS last year looked pretty darn good.  So I sprayed some clear coat left over my the M3's wheel refinishing right over the primer.  Perfect is not the goal here,  character is the goal.  Speaking of character, check out that faded Honda logo on the rear fender above.  It is from the original dealership in Florida, circa 1977.
The best part about riding the bike is the stops.  Watching hipsters appreciate it from the sidewalk.  Letting people take my photo at traffic lights, etc. My favorite. is the older guys telling me stories about when they had one.   Now, to find a CBX.... Hehe 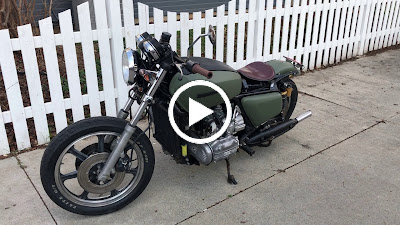 Whenever I ride her that song goes through my head over and over again.   If you are as old as this bike you'll know the song I mean.     This would  be the perfect project if only it was a car.