Italian twins, so you want a Ferrari and cant afford one. Buy a Ducati.

You love classic Italian cars but they are too expensive. Welcome to the club.  You've chickened out instead and bought something reliable but it now cannot fill that empty feeling in your heart.  You know, that feeling that there is absolutely nothing cool about you at all.  Perhaps we can get you a tiny dose of Italian machismo with an Italian motorcycle. Think of it as an alternative to a Fiat convertible. 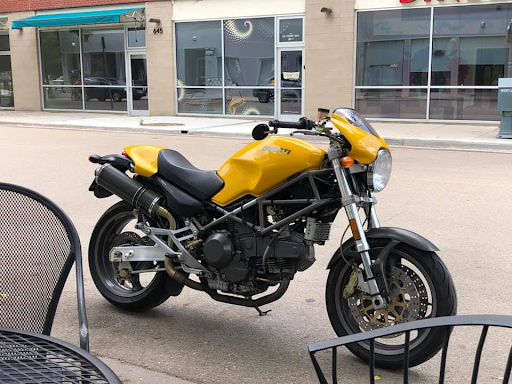 Yep, the air cooled Monster is the 308 GTS of Motorcycles.   A Ducati for the common man, you won't need to wear leathers with knee-pucks to ride it.  It's got character, but is as easy to ride as a Shetland Pony. It captures all that Italian sex appeal without making you a complete poser.  Perfectly compatible with your Levi's and Converse sneakers.

The Ducati Monster is an affordable modern classic and still as Italian as cappuccino.  It started life as an amalgam of older Ducati race parts, thrown together as a "standard" motorbike.  It sold like gelato, saved the company and invented the "naked bike"  in the process.  You could own an Italian piece of art and probably sell it down the line for a return better than your US Bank savings account can offer.

The example shown here is impeccably original and would run you less than an engine-out spark plug service on a Testarossa.  Now this it the kind of rationalization that just might work don't you think?

There is no shortage of Ducati Monsters for sale, but the tricky part is to buy the right one. That's a bit harder. The ideal scenario is a one adult owned machine, low mileage and completely original. Throw in EFI and adjustable suspension (like this one) and they start getting more rare.  Once you start looking here are some things to remind you what to look out for.

Buy a bike that is original as hell. Improvements are NOT what you are looking for if you expect this to be a profitable endeavor. When any vehicle reaches 10 years old it becomes affordable and people use their savings to "fix" them.  You must find a machine that has skipped that part of its life somehow. Moreover you must keep it this way so you can sell it for more than the average machine.  Oh, and having the original parts in a box somewhere is NOT ORIGINAL,  You'll fuck up a number of little fasteners as you endeavor to put everything back to stock while drinking prosecco and you know it.

Buy a fuel injected machine.  An EFI bike is much lower maintenance, and frankly Delorto carbs are outright witchcraft to maintain.  Carbs on Ducatis fall out of tune constantly and can be very hard starting in the cold.  So get fuel injection and skip all the tiny parts that can be temperamental w/in a carburetor.

You need a full-on trellis frame.  The Monster you are looking for must have a true trellis frame, (up to yr. 2006) as sourced from the Ducati 888.  That frame won 3 World Superbike Championships before they tossed in in the Monster, so it's got some Italian race cred for certain. Cool stuff ALWAYS has some close connection to racing, even if you personally don't.  Capiche!?
Avoid "tail chops"  An example of the kind of bastardification to avoid is the infamous "tail chop."  This is where a kid goes on the internet get's inspired then hacks off most of the rear, taking the OEM rear turn signals with it.  While it can be quite attractive to some, if you want to sell easily and for more than you paid, then get an unmolested example.

Displacement.  Seek a bike over 750cc.  The smaller bikes are as slow as lawn mowers. You will likely find many well preserved smaller Monsters; don't be tempted.   Like the Harley Sportsters, people buy these as starter bikes for spouses and many just don't get ridden.  The problem is they are lacking in adjustable shocks, good brakes and lack adequate as power.  Basically the bikes with the best specs are 900 and 1000 cc.  This example is a 900cc with uses a simple single spark design, not high tech by todays standards, "old-school."

While I'm pretty keen on OEM parts in most scenarios, I'd say exhaust is an exception.   Ducati muzzled these bike excessively and the sound of an Italian machine is paramount to the Guido experience.  Arrow,  Leo vince or Termingoni are all expensive options that dealers often installed during purchase.  Most importantly these examples do not require any permanent modifications to the machine.  If you own an Italian motorcycle is important that it sound like a dragon.  The Leo vince pipes are the bike pictured are the quietest option.
Search for a bike with under 10,000 miles.  While they don't appear every week for sale, plenty of bikes sit unused for years, so you just have to be patient.  While you certainly want a bike with low miles it will still need recent service confirmed. Ducati timing belts can dry out and break, this is especially possible with bikes sitting inert. If the belt is not new, replace immediately.  It's quite easy to do yourself w/o any fancy tools.  Valve adjustments require training, but don't degrade from sitting, so this may or may not need to be done depending on mileage.

More on originality. While I'm no fan of fairings on a naked bike like the Monster, you want one if they came with them when purchased, just take it off and store it carefully.   Also, the existence of the OEM fairing assures you the previous owner didn't ride the thing into the back of a bus.  Factory turn signals seem dated when a bike is 10 years old, but when it's 20 years old they look classic.  It's also a good indicator no 25 yr. old has monkeyed around with your wiring harness.

Another temptation to watch out for is replaced or missing foot pegs.  The pegs are mounted quite low on Monsters so if anyone wanted to ride aggressively, they would typically need to replace the foot pegs.  It's not just the missing OEM parts that are a problem, but the fasteners that are typically long gone too.

Tanks.    Early metal tanks are prone to denting because people are stupid and they don't repair easily since the metal is petty thick.   900 or 1000 cc bikes are typically owned by veteran riders, so the tanks are dented less on the sides from falls but more on the top of the tank.   Belt buckles banging down onto the top of the tank during wheelies.    Naturally mine is metal and is flawless. 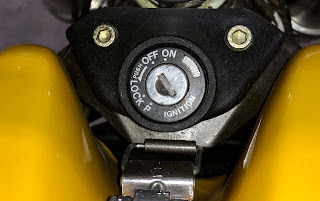 Later Monsters have a plastic tank when cannot be dented.  They do swell from ethanol in modern fuels and cannot be replaced under warranty any longer.  Look for crowding of the ignition key and rubbing.  If you cannot use ethanol free gas then store your bike with a FULL tank only, that prevents ethanol from vaporizing in the tank.  If you cannot keep it full, leave the tank cap slightly open to allow vapors to escape.   But if your home explodes, let me know and I’ll delete this blog 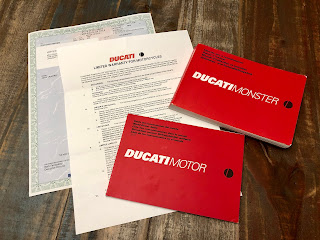 Paper work matters.   While you can certainly look up everything on the internet, these people salivate over original paperwork.  So you should want this crap too.  Motorbikes rarely have a window sticker, but there is always paperwork and manuals that make you look like an ideal seller.